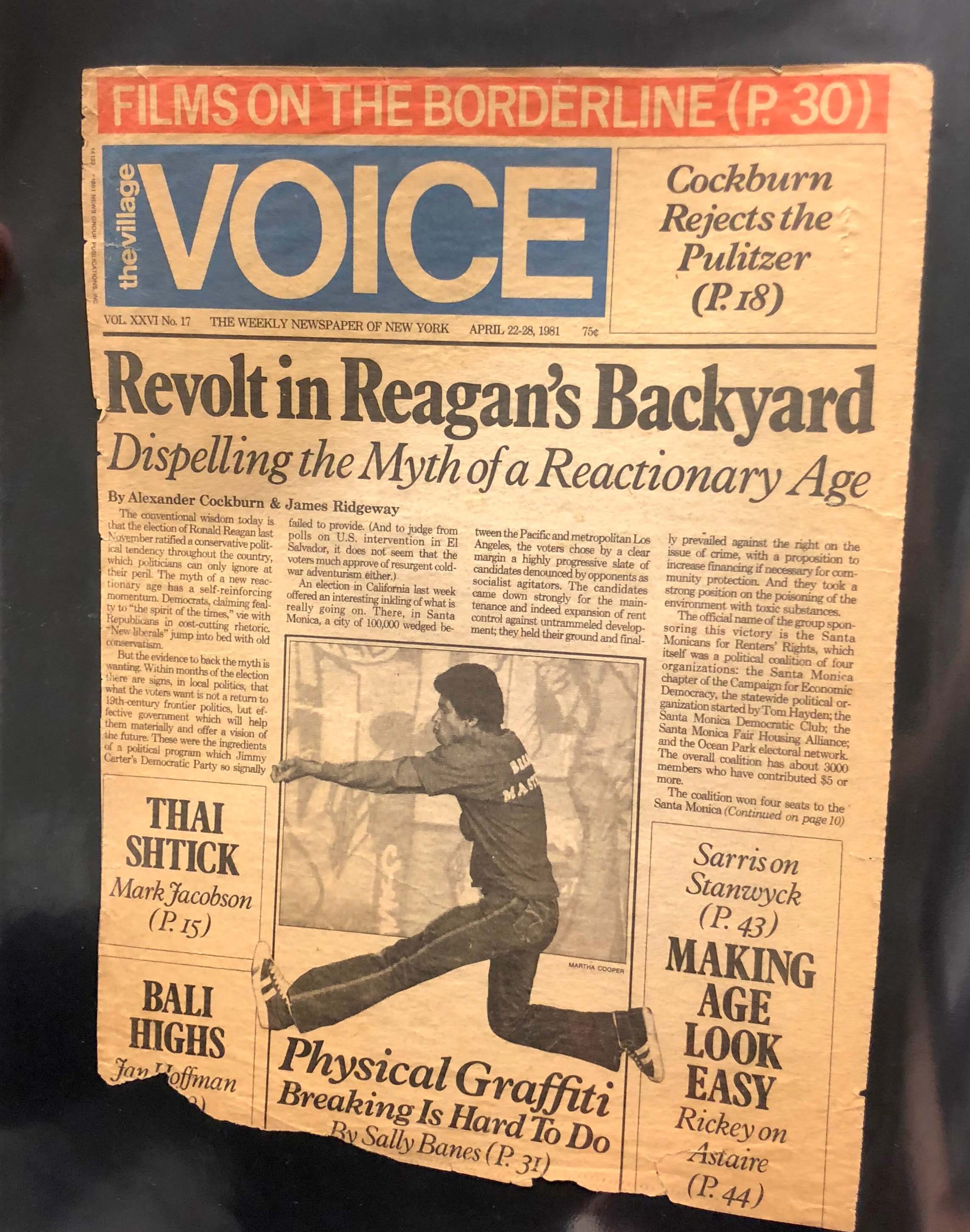 Alright let’s get down to some serious business.

The first time breaking was covered as a dance form in a major newspaper:

We bounced into a physical copy of the article while doing research at Cornell University Hip Hop Collection’s Crazy Legs’ archive. The front page would feature Frosty Freeze of the Rock Steady Crew and you could get your copy with a moderate price of 75 cents.

Reading the article is fascinating, it’s like a time machine taking you back to 1981. Imagine yourself as a reporter trying to describe a dance style which the audience has never seen before (this is before breaking was really exposed to the general public). Not an easy thing to do, but Sally Banes the reporter does a pretty good job with it. Martha Cooper‘s incredible photos spice up the article.

“Spy, man, in ’78 – he was breaking at Mom and Pop’s on Katona Avenue in the Bronx; he did his footwork so fast you could hardly see his feet”. he continues. The article focuses a lot on the battle aspect of the dance. It describes in detail the battle tactics of the b-boys of the time before the competitions and big stages:

“When you choose your moves, you not only try to look good; you try to make your successor look bad by upping the ante. That’s one way to win points from the crowd, which collectively judges. Going first is a way to score a point, but so is coming up with a cool response, chilling out. Through the freeze, you insult, challenge, and humiliate the next person.”

Other important topics that are being discussed are style and originality. Fab Five Freddy puts it good:

“Just like in graffiti – you make a new style. That’s what life in the street is all about, just being you, being who you are around your friends. What’s at stake is a guy’s honor and his position in the street. Which is all you have.” Breaking is seen as a tool to deal with conflict, as an alternative to fighting but at the same time a heated battle might just as well lead to one. Unlike today, breaking is still strictly a teenager thing to do. “Younger kids learn to break by imitating the older kids, who tend to outgrow it when they’re about 16. Concrete provides the best surface to the feet and hands to grip, but the jamming is thickest in the parks, where the DJs can bring their mikes and amplifiers”.

The article speaks a lot on other elements of hip hop, graffiti, rapping and dj’ing, but it’s good to notice this article was written before the culture was called hip hop. The article simply refers to them as “the other forms of ghetto street culture”.  The term Hip Hop as a word to describe the culture was publicly used the first time around a year later… But we’ll get back to this one on next week’s newsletter ;).

The Beauty of Ground Power

How I Prepared For My Battle Against B-Boy Machine