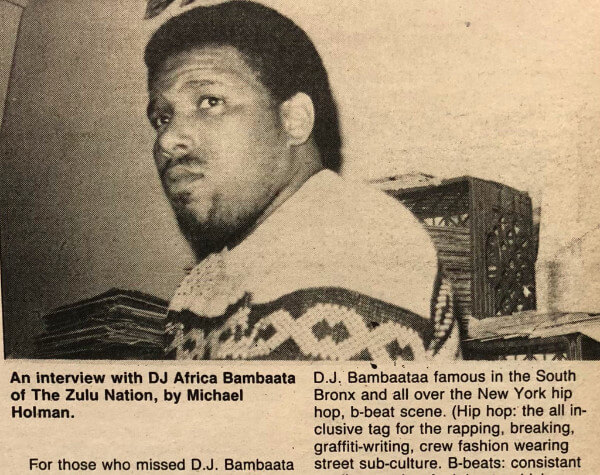 Every now and then there are moments in history that change the course and will be referred back to by the next generations.

Village Voice newspaper’s article by Steven Hager from September 21st 1982, Afrika Bambaataa’s Hip Hop, is one of them.

When asked “How did hip hop get it’s name?” this is what is most often referred to.

The words themselves had been around for long, and even used together by MC’s like Cowboy and Lovebug Starski, way before Sugarhill Gang started their first hit record “I said a hip hop“. But the article is where Bambaataa described some of the principles of hip hop, spoke on the four elements of hip hop (breaking, dj’ing, rapping and writing also known as graffiti), and put the words “hip” and “hop” to a cultural context.

The article explained the cultural history the political surrounding of the time that led to the birth of hip hop culture. I starts off by going deep in the gang culture of New York, how heroin killed the gangs in the 50’s and how the gangs resurrected in 1968.

It explains dj Kool Herc’s contribution on sparking the fire with Jamaican dj heritage in the Bronx, same as Grandmaster Flash for upgrading technique and Theodore for inventing scratching, and eventually Bambaataa earning the tittle Master of Records. It mentions some of the original b-boys as well like Cholly Rock and Grand Mixer D.ST and speaks on the development of breaking aside of the other expressive elements of hip hop.

This article has it all and it hit the masses already in 1982 out of the blue sky. You can read it at the Cornell University’s online collection:

What we found out in Cornell University, this wasn’t the first time and the first newspaper article the term hip hop was used to describe the elements.

Another interview with Bambaataa from 8 months before this already speaks on it. On East Village Eye January 1982 Michael Holman introduces his interviewee Bambaataa and hip hop is mentioned as an all inclusive tag for rapping, breaking, graffiti-writing and crew fashion wearing street sub-culture. So in that way, East Village Eye need to be mentioned as well. Maybe Village Voice wasn’t the first one but surely it was the most significant one by being thorough and explaining principles as well. Nevertheless, hip hop was out there, and Village Voice article was where it was truly gathered as a cultural force. Wild Style was ready and the world didn’t know what it was about to experience. A cultural revolution that would influence millions of people.

“Few New York subcultures in the past decade have been so relentlessly creative as the one that  has given us rap music, graffiti writing, and break dancing, perhaps the first youth culture to put its highest premium on individual imagina­tion.”

Give it a read, I guarantee it will inspire you!

Why the Dopest Battles are in the Cypher

Will you wait for your opponent to start the battle?